Subject: FLA (rooms 310 and 734, 5A, 120, 109) This little green Daewoo (rental) car is killing my back... I poked down along the Gulf coast and drove most of the way through the Everglades (in the dark: spooky: "panther-crossings") without seeing any motels... finally, just the Miccosukee _Resort (I hate that word) and Casino... I _had to stop I was so tired... it cost $79 (a special: for one or two) with breakfast... very fancy though: bathrobes, embroidered slippers, hair dryers, scales, numerous lotions and potions in the bath, video games, saunas, pool, Matisee reproductions on the walls, there are three phones in my single room...). I may double-back to the Miccosukee Indian Village airboat ride through the grassy Everglades... it's either that or a quick visit to the Keys. Both places where I've stayed had safes in the rooms.

I recorded the cacophony of (video-slot machine) sounds in the casino (but didn't escape being 'inspected' by guards thrice... they watch everyone from the ceiling cameras... they didn't detect my little mini-disc recorder and mic though :-)) There's a "rapid-bingo" game here: you choose a board with three numbers and the game is over in half-a-minute... I thought the same thing in Nevada a few years-back: practically everyone here looks especially un-exceptional... And some nice photos of swirling searchlights out-front, of a cloudy full moon (possible 12hr-imagery)... No one was at GraphicStudio Sunday (not all that surprising I guess), but I'm arranging a time to visit on Friday/Saturday... giving me a little time for this quick tour... Florida is very flat and for the most part really _is largely populated with morose, pudgy, upper-middle-class white retirees... still, all that water, and the intercoastal waterways and lakes, and the sun, and the inexpensive rents inland, _do seem appealing... Not as crowded as California's Bay area. ... I actually wrote some notes prior to writing this -- this strategy usually isn't too good for me ... I either can't get it down (legibly) on paper, or I don't end-up quite understanding where I was going after-the-apparent-fact; (voice-transcripts don't often work for other reasons) ... I'm still in Florida -- the Keys... not so warm, only 60's. Back up to Tampa to visit the GraphicStudio by Friday. Hank won't be there... Perhaps there is less possibility there than I'd hoped. It's the only place I've heard-of that apparently is interested in contemporary fine-art imaging processes... (Most Fine-Art Printmaking faculties are pathologically resistant to new/expansive developments...) Still on the decrepit houseboat in Big Coppit Keys... I saw this tiny thin long (10") translucent fish outside my door/dock...

The Needle Fish. Darts and Leaps! Unquestionably, the luminous-aqua-water-green-color (along with the usual warm temps), is the big attraction here. This color is only a little more yellow than the classic turquoise housepaint used by East Maritme coastal fishermen (to visibly cut through fog at sea: there's home! ). And -- is the color of my old truck (that I can't afford to bring down to San Francisco)! Somehow I'd like to work the idea of these storm- (window) shutters into this... I like the highway (hurricane) "evacuation" route

symbol. The hurricane is a universal symbol of the Self (in a Jungian sense) in its most primordial form. The 'fridge is rusty but it has an automatic ice-maker inside... small or large crescents? Ten Temple oranges for one dollar at Publix Supermarket. Last night I saw this little powerboat (along with frantic, engine-cord-pulling operator) finally drift into the scrub-at-shore/highway-line... He kept at-it, but there was really little that could help. Finally Grounded. There doesn't seem to be any heat. I've turned the oven-on. The cartoon pelicans stoically sit on the piers. Clacking their long beaks. You can get real close. No limp cigar. While at the Casino (in the Everglades), I was awakened by the lightning at 5 a.m. and watched the swamp illuminated from the seventh floor. Next morning, I vaguely remember my 'free' buffet breakfast... (I _did need to ask for ketchup for the (very good) homefries.) There are (way-too-meticulous: suspicious( ?) Indian-woven baskets, and pictures of the current Tribal council-members in display-cases. (Apparently the US constitution was partially based on "native" principles.) Fascinating flickering headlights seen through the swamp-brush from the hotel... and of course, the downtrodden-losers-slogging back to their (indebted) vehicles in the rain... Is there anyway to honestly earn enough money to have a home; _necessarily ill-gotten gains...(?) "Us" at the expense of you-all. I'm constantly amazed by how many people have _so much money...

This page is the color of the (red) Gumbo-Limbo (tourist) tree. The type/frames are the color of the water... Art Museums still make my stomach turn, I won't go near them. Visited a Natural History Museum: Tropical Crane Point Hammock in Marathon (Florida Keys). There was a huge, wild, colorful, visiting gecko lizard sunning himself on the metal roof. Also, geckos in cages: one was 17 years old and arthritic. He would nod his head rapidly up-and-down when he had something good to eat. Nature Trails. Remains of Cuban boats that made it to the US: one was made primarily of styrofoam -- alongside dug-out canoes from pre-Columbian Key Indians who've lived here for two thousand years... Also, the Adderley Village: Black Bahamian architecture: beautiful building: tabby construction (crude cement made with ground conch shells). The tiny Black community at Old Rachel Key were spongers and charcoal burners. Dried conch-meat was called Hurricane Ham. It's still amazing to me how poorly we are usually educated: we really just know less and less: just more and more (often useless, usually incestuously-institutionally- motivated) specialization: many of us have little practical survival skills: fishing, farming, building, sailing... even, attendant visualization capabilities and rooted-poetry/stories... If there's a sustainable future for the Arts, they _must determinedly recoup these dissipating cultural skills. (There's a _very cool, hands-on, live-in, sustainable, eco-agriculture program at the University at Santa Cruz! I stumbled-on-it while visiting the neighboring: wonderful: Arboretum.) In the olden-days, the first person to reach a frequent ship-wreck could claim all the cargo, which was frequently sold-back to the owners. Conch Shells: now a $500 fine for harvesting them. Republic. Currency. There's a fake Bahamian pale orange color on some buildings here.. doesn't work... need vast expanses of white sand between the mangrove greenery. Pretense. The miniature (inbred) Key deer. What portion of a sequence of events can be effectively denied and what affirmed? BreakingNews: http://www.herald.com. A constant stream of traffic on US-1: harvest the energy: rollers in the road? How to re-define/divert the connection between "finance" and time?

Reading the ripples: music. Comeback-t0-where? How to limit restrictive power and disperse economic opportunities? FLA (2-days rm 120 and 1-day rm 109) Incredibly foggy these mornings: potential 12hr-photos of the sun through it all... Visited GraphicStudio (USF): very low-energy but they seem to be the only traditional printmaking studio that attempts to push the technological envelope at times. Most impressive were the over-sized, hand-printed photo-gravures (dense, lush, blacks): some 'important' artist (CC) was producing these portraits of other 'important' artists.... but the proofs looked pretty good.... highlights a little blown-out: perhaps a second/duotone plate (?) I'm pretty sure that there are now digital gravure plate-making processes that could be applied; this would virtually eliminate the acid-bath guesswork, in addition to enabling a better grasp of complex/multi-colored tonal ranges... I'd like to see them get into digital hi-fi inkjet printing too; there are maybe a dozen shops in the USA doing contemporary artist-editions (IRIS usually), but they all seemingly/needlessly suffer in some circles from an association with ubiquitous 'watercolor reproductions.' For that matter, a little digital 4C offset press too: printmaking faculties still restrictively cling to dead phony notions of 'limited editions.' Might be interesting to see a big- photogravure grid of small postage-stamp-sized 12hr-images... an ongoing process for the printers who could pull the images offline as they needed them... Just circled around Tampa environs for the rest of my time here... 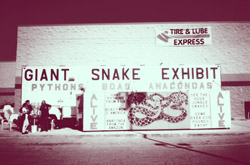 I could actually afford to have a studio here! (Maybe set-up a little dreamy printshop of my own.) I like the Winter Haven area -- mid-way between Tampa and Orlando, in the midst of all those little inland lakes... Saw this great abandoned, long-over-grown, drive-in movie theatre: all brick/cinderblock construction (hurricane-proof?), along with a similar bunkerstyle projection booth -- the grazing cows were loitering 'round the snackbar... The pictorial pastoral potential here is immense... I'd love to spend a year plein-air painting variations of this scene.... and maybe pinhole-photos too. Outside Lake Eagle's Walmart (store): a travelling Huge Snakes exhibit/trailer; only $1. Drove around and around looking for the Miami Jai-Lai courts that were marked on my map -- apparently they've been replaced with a big Home Depot (store). Back to San Francisco. Tried to connect from the airport payphone... unsuccessful: hope that the 12hr script at home is still posting the jpegs! Eagerly awaiting Can Cun Gran Desayuno with eggs and ham at home..